Is this thing on?

The Pittsburgh Pirates have reported to spring training and soon there will be Major League and Minor League spring training games.  Did you know that there were minor league games?  It is not like a normal 9 inning game.  Sometimes there is not a set batting order or three outs per inning.  Sometimes a rehabbing player will lead off each inning to get in some at bats or each inning will start with a runner at second to work on certain situations.  For the most part you can count on a smooth 9 inning game, but from time to time things can get a little out of whack.  The Tribe’s schedule starts on St. Patty’s Day.  They will primarily play other minor league teams from the Phillies, Yankees, and Blue Jays.

The hope for every player in camp is to make a Major League opening day roster.  After that the challenge is staying in the Majors and for a select few they become household names.  One name that resonates throughout the game of baseball is “Griffey.”  Ken Griffey Sr. was the keynote speaker for last weeks Hot Stove Luncheon.  Before starring on the Big Red Machine, Griffey played for the Indianapolis Indians in 1973 and 1974.  The three-time All-Star and two-time World Series champ was kind enough to answer a few questions.

The Colts just went to the Super Bowl and the Final Four is two months away, what was the city of Indianapolis like when you played here?

Steroids have changed the game and the record books. Looking back, is your son the real home run king of the past 20 years? Will he ever get that recognition?

I look at it this way: barring injuries, he had a very good opportunity to be the home run king. But (now), the only thing I worry about him being is healthy and that’s more important than anything else right now.

During the NFL Network’s Super Bowl pre-game coverage, Marshall Faulk said you and Jr. are the greatest father/son duo in sports history. Are you OK with that and is Trey the next great Griffey?

Well, we have a few of them – there’s a couple of Griffey’s coming along, not just Trey. Nathan thinks he’s going to hit more home runs than his uncle (Ken Griffey, Jr.). But that’s a heavy load for Marshall to say we’re the greatest father and son duo, but I’m very proud of our accomplishments. When I got the opportunity to play with Junior – and it took me awhile to get there and I didn’t think I was going to get to Seattle at the time – the timing was perfect for us. I didn’t think he was going to get there at 19 (years old). But, no, you can’t take away it from Archie (Manning) and his two kids (Peyton and Eli). I was an Archie Manning fan and I used to love watching Archie quarterback. But I didn’t like seeing him pick himself up off the ground all the time. He didn’t have too much around him, but he was tough. And every time he went down he got up and was passing. Their success and accomplishments are great. Any father son duo that played any major sport is an accomplishment. I’m proud that we had the opportunity to play together.

There is a great divide in baseball among the haves and the have nots. How wide was the gap during the Big Red Machine’s run?

I don’t think there was that much of a gap (between the Big Red Machine and the other MLB teams). I just knew that we played every day to win. And we played well – we didn’t make very many mistakes; that was the most important thing. Our team was very efficient in what we had to do and everyone knew their job and what they had to do. At that time we were the best in baseball. You look at the 1975 and 1976 teams and we were the best team those two years. But at the same time, we never thought about the gap between the 1927 Yankees team that everybody compares us to or anybody else. We thought the Dodgers and the Phillies and the Pirates we just as good as we were. So we just played well. We didn’t make any mistakes; we made other teams make mistakes. But the biggest thing is that no one gives our pitching staff any credit. Everyone talks about Sparky (Anderson) being captain and every five minutes he’s taking someone out, but we had an excellent pitching staff. That’s the reason we were always in ball games to win ball games late.

Outside of your rings, what is your favorite piece of memorabilia?

My favorite memory was probably the back-to-back home runs with Junior, and getting the opportunity to play with him. And in my first full year in the big leagues we won the 1975 World Series.

But my favorite piece of memorabilia outside of my rings is probably the ball from my first Major League hit or Junior’s 400th home run ball, they are just a couple of items I have at the house.

I want to thank Brian Bosma and Chris Binnall for helping me with the Interview.  I think he was modest when talking about his son and how his home run totals stack up against those who used steroids.  Then again after spending a few minutes with him you realize he doesn’t get too worked up about numbers.  It’s the memories that he carries with him. 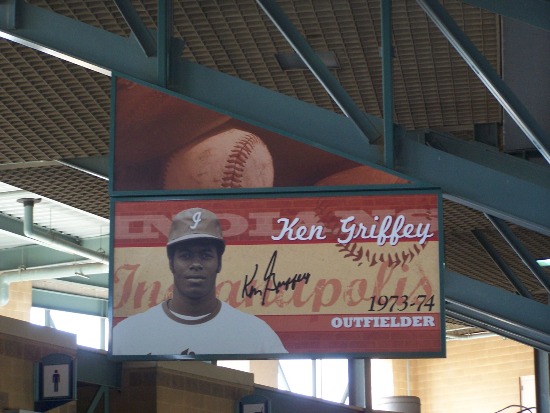 Ken Griffey Sr. has a permanent place at Victory Field.  One of the best parts about my job is talking with season ticket holders.  A few of the old-timers love to talk about Indians history and for the past week it has been a lot of fun hearing stories about Griffey playing at Bush Stadium.

It was a difficult Monday for the city of Indianapolis.  In addition to the Colts stunning loss in the Super Bowl, the Circle City was bracing for another 5 to 8 inches of snow.  Now, I can’t cheer everybody up, but do you realize we are 9 weeks away from the boys of summer returning to the diamond?  The Indians open their season on April 8th in Columbus and may field their most talented team since the 2005 campaign…more on the 2010 Indians roster in a minute.

Hitting Coach Jeff Branson is in town for the Tribe’s annual Hot Stove Luncheon.  Jeff along with keynote speaker Ken Griffey Sr will help us forget about Super Bowl XLIV and start thinking baseball.  At the end of the Indians season Branson went to Pittsburgh in late September for four days to work with hitters and get a lay of the land.  He was there when the Pirates won three out of four from the eventual NL West Champion LA Dodgers.  He told me what stood out was the Dodgers basically got beat by the Indianapolis Indians.  There was so much movement between Indy and Pittsburgh a season ago that on September 27th the team that beat the Dodgers featured EIGHT players in the starting lineup that wore an Indians uniform in 2009.  The lineup that day…

When it was all said and done a total of 25 players wore an Indians uniform and a Pirates uniform in 2009.  I don’t expect the 2010 Tribe to match that number, but I believe 7 out of Baseball America’s Top Ten Pirates prospects will play in Indianapolis.  Here is the list and who I think will play with the Indians:

#3 Tony Sanchez…Double-A Catcher, may see him in August

#10 Gorkys Hernandez…sleeper for opening day, but will see him for 70+ games this year

Baseball America believes in them and we will find out soon enough if they have what it takes to play at Triple-A and eventually the big leagues.  During the off season I set up families and business with season tickets and I’m often asked if the Indians will be any good.  My typical response is…”you never know, but I hope so”…this year it has been…”yes, there is a lot of young talent that can win a ton of games.”  On paper the Indians will be full of prospects that have an eye on PNC Park.

A new feature this summer is my twitter account.  I’ll be updating you on roster moves and real time scoring all summer long.  So give me a follow if you want the latest on what’s happening in Indianapolis.